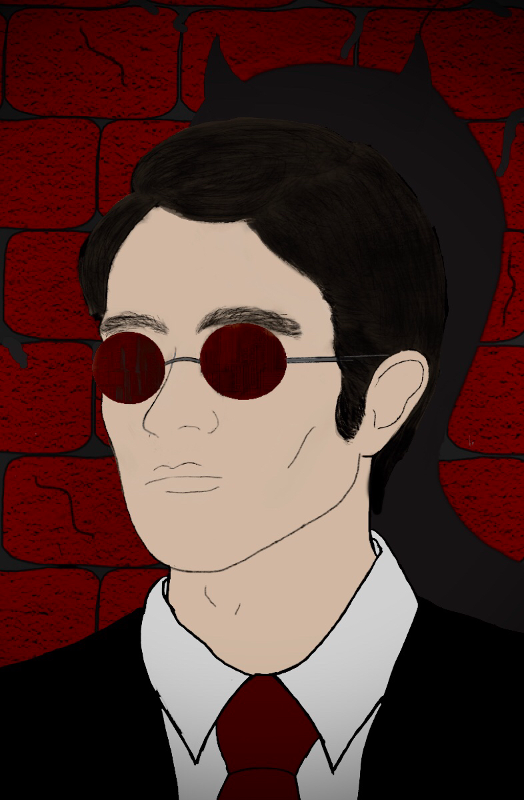 I love the comics and I love the Netflix series. The stories, the characters, the whole package! Alas, I’m a shipper at heart and thus my fanfiction focus on getting Matt Murdock and Foggy Nelson together.

Some of my Daredevil Fanfictions:

You’re not gonna kiss me

Inspired by Foggy speaking exacty these words on the show:

Matt and Foggy are in a bar, planning their future. It’s all very platonic until it’s not.

Matt promised to give Foggy some self-defense lessons. But he keeps postponing them because he does not want to bring Foggy into the darker part of his life. However, when others take Foggy's lessons in their hands, Matt doesn't like it one bit.

Foggy has a new boyfriend. Karen is very happy for Foggy and would love to meet the new man in his life. However, this is harder than one would think.

Leaving Shadowland is a comic based series about the aftermath of the Shadowland arc with an alternative take on the events after the showdown.

The Locked Door, is a story, set in an alternative timeline with a darker take on Daredevil. Foggy and Matt are married. Their relationship is perfect - or so Foggy thinks. One day, he finds a door he never saw before and Matt is being very secretive about it. But why?

In The Devil (you think) you know, Matt appears to be ready for romance again so Foggy decides to finally be open about his feelings for his long time friend and partner. It's about time and what could go wrong?

Diversionary Tactics, finds Foggy in trouble. It doesn't last long since Matt comes to his rescue. This leads to an argument about personal safety. In the end, both win.

Harmless is an explicit story about secrets, eavesdropping, misunderstandings and anger, but with a happy ending. Explicit! ;)

The Moments in your Arms is a more somber MattFoggy story, but nonetheless very explicit!

Unheard Confessions is an angsty story but with a happy ending. There are mentions of violence and murder (no direct depiction though) and explicit sex scenes.

Blink of an Eye is a post-snap story in which Matt can't find Foggy after it happens. Angst with a happy ending.

In Unspoken life has normalised for Hell's Kitchen's golden trio after putting Fisk away. But Daredevil is too big a part of Matt and too tempting a solution when the law deals with the bad guys not fast or not harsh enough. One day he calls for him again. Foggy anticipated that. NSFW, angsty but happy ending.

Safe and Mine touches some very angsty and dark topics, especially a dark side of Matt Murdock. Also, there is violence and explicit sex. Not for minors! Adults, proceed at your own risk!

The Dark Corners of our Mind is strictly speaking a "friends to friends with benefits to lovers in speedrun" story. However, it contains explicit sex, including rapeplay/CNC. Not for minors! Adults, proceed at your own risk!

In Holding on Matt once more returns home after trying to distance himself from his friends. This time he wants to do better and hold on to Foggy

Because the night belongs to us is a vampire fic, set in a mixture of TV, comic and headcanon universe in which the Defenders have to deal with vampirism. NSFW warning! Contains blood, violence, undead creatures and explicit sex scenes, including those with dubious consent. Minors, turn back! Adults, proceed at your own risk!

I put those in an extra category as they are a very specific taste. If you don't know at all what Omegaverse is, those stories will probably leave you confused. Again, not for minors, adults should google the term to know what they are getting into. xD If you are up for it, check here for Daredevil Omegaverse stories.

Not all of my stories are up here yet and it will probably be a while until they are. Check out my AO3 page“EmeraldStorm” for more Daredevil stories